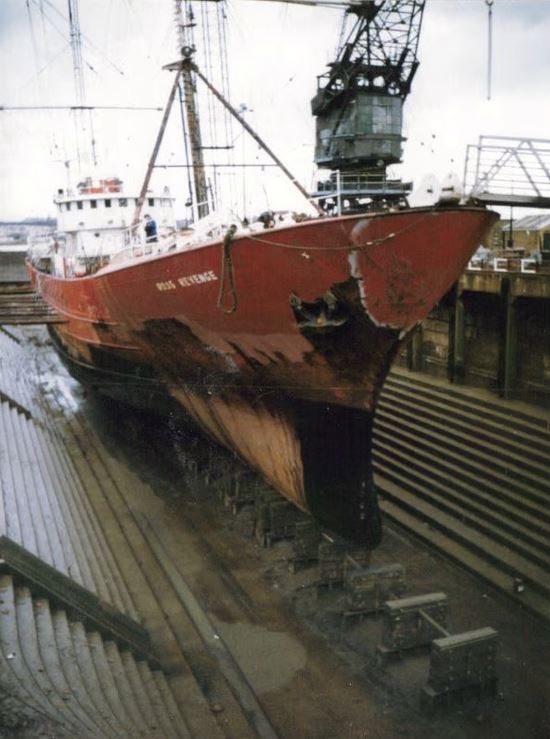 The fact that Ross Revenge survives is not so much down to the care we have lavished since 1992, though we probably have painted the ship five times now, by which we mean those parts which were accessible. Only once when the ship was in dry dock an age ago were we able to paint from the waterline down to the keel. After the lower hull was pressure washed, the best we could afford was to have bitumen paint sprayed on. Better than nothing, but there is probably no paint left there now.

Survival is actually due to her heavy duty construction when being built for her intended purpose, namely to go in to the most hostile areas of the ocean to catch fish when lesser vessels would be running for shelter. Distant water fishing was the most dangerous peace time occupation in the UK and many trawlers were lost, sometimes with all hands. The original owners specified that the hull plating should be thicker than the builders had recommended and that she should have an ice breaking bow. Recently, or relatively so, we had the hull thickness checked at various points from the inside out and while fearing to find places so thin that restoration was not feasible, in fact the plating had not wasted much at all. Probably very high grade steel was used.

It is known that at some point between 1983 and 1992, Revenge suffered some hull damage probably when grounding on the Goodwins. So a dry dock must be found and the ship taken there. Since 1960 everything has changed in the process of preparing and painting the hull of vessels. Nobody uses chipping hammers any more, nor needle guns. Shot or sand blasting is going out of favour and indeed dry blasting is mostly prohibited now as a health hazard. The present method of ultra high pressure fresh water blasting, removes everything, barnacles, weed, rust scale and paint to leave a chemically clean surface ready for coating. In the same way nobody uses red lead and conventional solvent based paints now but two pack epoxy paint where if sufficient coats are applied. a hull may get 100% protection for decades.

The metal of ships deteriorates due to electrolysis but this is countered by the use of sacrificial anodes earthed to the hull and these zinc alloy blocks are designed to corrode thus protecting the steel. In our mantra of ' better than nothing ' we have been suspending anodes on wire rope with the anodes under water and the wire earthed to the metalwork. In dry dock a lot, like lots and lots, of anodes need to be properly welded to the metal. In the base of the engine room port and stbd are sea chests and on the top of these are many wheel valves that admit sea water to the ship for the sanitation and for cooling the main engine and auxiliary machinery. These valves were overhauled in the last dry docking but as stated, that was an age ago and they surely all need renewing now. Then we can open and close them without fear of flooding.

Welding and metal cutting has also moved on from the days of oxy acetylene and arc welding. Modern inverter welders and plasma cutters will make the task of cutting away and renewing damaged plates and ribs much easier but still costly of course. Then there is the problem of the bilge keels. They should stick out from the hull both sides , but they don't.

But proper attention to all these matters will provide a ship that will stop deteriorating and will have what the marine world calls ' watertight integrity ' which means in our terms that she ain't gonna sink nor have any hidden terrors. With this achieved we can look at other tasks.